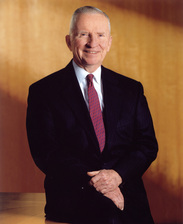 Ross Perot
Ross Perot was born June 27, 1930, in Texarkana, Texas.  Perot entered the U.S. Naval Academy in 1949 and graduated in 1953.  While at the Naval Academy, he served as Class President, Chairman of the Honor Committee and Battalion Commander.  After graduation, he served four years at sea on a destroyer and on an aircraft carrier.

In 1956, he married Margot Birmingham from Greensburg, Pennsylvania.  Upon his honorable discharge from the Navy in 1957, he joined IBM as a salesman in the Data Processing Division in Dallas.  In 1962, he started Electronic Data Systems (EDS).  Over the next 22 years he built EDS into one of the world’s largest technology services firms.  In 1984, Perot sold EDS to General Motors.  In 1988, he founded a new technology services company, Perot Systems Corporation, where he served as Chairman Emeritus until November 2009, when it was acquired by Dell Inc.

For his efforts to help improve treatment for U.S. prisoners of Vietnam, Perot received the highest civilian award presented in 1974 by the U.S. Department of Defense.  In 1979, he directed a successful mission to rescue two EDS employees taken hostage by the Iranian government. Perot chaired the Texans’ War on Drugs Committee, and led the effort to reform the state’s public school system.  Because of his humanitarian efforts, Perot received the Winston Churchill Award, presented by Prince Charles and First Lady Nancy Reagan; the Raul Wallenberg Award; and, in 1990, the Patrick Henry Award, presented by President George H.W. Bush. In 2004, he received the Eisenhower Award in appreciation for his more than 40 years of support for the American military.  In January of 2009, for his lifetime of service to veterans and the military, Perot received the VA Secretary’s Award, presented by Secretary  James Peak.

The Perot family is actively involved in numerous charitable and civic activities.  Through the Perot Foundation, funds have helped wounded soldiers, and funded medical research, particularly for illnesses associated with Desert Storm.