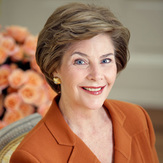 Mrs. Laura Bush
As a gracious representative of the American people, Laura Bush is actively involved in issues of national and global concern, with a particular emphasis on education, health care, and human rights. As First Lady, Mrs. Bush made a historic trip to Afghanistan in 2005 and witnessed firsthand the progress achieved by the Afghan people after the fall of the Taliban regime. Her involvement in Afghanistan began in 2001, when she delivered the weekly presidential radio address to call attention to the plight of women and children suffering under the Taliban. From her role as Honorary Ambassador for the United Nations Literacy Decade to promoting teacher recruitment programs, Mrs. Bush has been a strong advocate for literacy and education. Inspired by her success with the Texas Book Festival, Mrs. Bush founded the National Book Festival that each year draws more than 100,000 people from across the nation to Washington, D.C. As the leader of President Bush's Helping America's Youth initiative, she has also drawn attention to proven programs that benefit our nation's youth. Mrs. Bush is an advocate for women's health and has been an active participant in campaigns to raise awareness of breast cancer and heart disease, both in the U.S. and around the world. A hiking and camping enthusiast, Mrs. Bush has served as Honorary Chair of the National Park Foundation, has worked to promote the Junior Ranger program and has helped start Preserve America, a national initiative to protect our cultural and natural heritage.