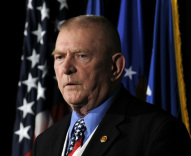 Eugene F. Kranz
A legendary NASA Flight Director for Mercury, Gemini and Apollo missions, Eugene Kranz is best recognized as the leader of the "Tiger Team" of flight controllers who brought the Apollo 13 spaceship safely back to Earth on April 17, 1970. Originally from Toledo Ohio, Mr. Kranz graduated from Parks College of Saint Louis University in 1954 with a Bachelor of Science in Aeronautical Engineering. He served as an Air Force fighter pilot and flight test engineer on early jet bombers.  His career with NASA began in 1960 when he was assigned to the position of assistant Flight Director for Project Mercury.  He assumed Flight Director duties for the Project Gemini and Apollo missions. He led the teams during America’s first lunar landing and the successful return of the Apollo 13 crew. In 1983, Mr. Kranz was assigned as the NASA Director of Mission Operations. After 37 years of federal service, he turned to motivational speaking and writing.  His book on the early manned space program, “Failure Is Not An Option” was a New York Times best seller and was selected by the History Channel for a documentary on Mission Control. He has received numerous awards, including the Rotary National Space Trophy, the Presidential Medal of Freedom from President Nixon and the Distinguished Rank of the Senior Executive Service from President Reagan.  A Texan for over five decades, Mr. Kranz and his wife Marta are the proud parents of six children.