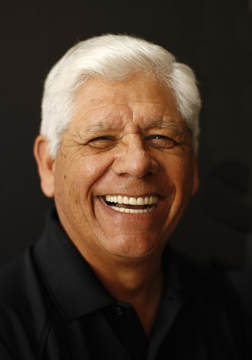 ​Lee Trevino was born in Rowlett, Texas, and raised by his mother, Juanita, and grandfather, Joseph, a laborer and gravedigger. Trevino worked in Garland’s onion and cotton fields as a five-year-old, and at age seven the family moved into a four-room house near Dallas with no electricity or plumbing and about 100 yards from the former Glen Lakes Country Club.

By age 8, Trevino was scavenging for balls in the Glen Lakes rough and selling them to players. He became a caddie and played a crude par-3 course behind the caddie shack. Trevino dropped out of school before the eighth grade and took a job as an assistant groundskeeper. Restless, he lied about his age and joined the U.S. Marines at 17, serving four years in Asia and playing for the Third Marines Division golf squad. Upon his discharge in 1961, Trevino was carrying a 4-handicap.

Lee Trevino has made an immeasurable impact in American golf. He taught himself a golf swing, played his first 18-hole round at age 15, and turned professional at 27. His first Tour victory was the 1968 U.S. Open, which ignited his career. He went on to capture six major championships out of 89 worldwide professional triumphs.

A victory at the U.S. Open playoff in 1971 ignited a remarkable 20-day run, adding the Canadian Open and British Open Championships – making him the first player to win those three titles in the same year. He defended his British Open Championship in 1972, and won the 1974 and 1984 PGA Championships. He appeared on six Ryder Cup U.S. Teams, posted a 17-7-6 record and served as the 1985 U.S. Captain. He was the 1971 PGA of America Player of the Year and won five Vardon Trophies for season scoring excellence.

Trevino has supported countless charities through his agreeing to be “auctioned” to a donor, then playing golf with groups throughout the country. St. Jude Hospital for Children is a special cause for Trevino, and the subject of his philanthropy. He received the PGA Distinguished Service Award, its highest annual honor. Trevino and his wife Claudia are parents of daughter Olivia and son Daniel.  Trevino is also father to son Richard, daughter Troy, and daughter Lesley, who passed away. Lee has eight grandchildren and two great grandchildren. His World Golf Hall of Fame career was a remarkable blend of nurturing a connection to golf fans, while mixing a passionate yet private philanthropic life.