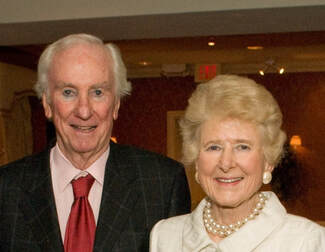 Edith Jones O'Donnell was born in Abilene, Texas.  She graduated from The Hockaday School in 1944 and attended Mills College in Oakland, California before graduating from The University of Texas at Austin (UT Austin).

She and her husband, Peter, founded the O’Donnell Foundation in 1957, a charitable and educational foundation with an emphasis on strengthening math, science and arts programs in Texas.

Mrs. O’Donnell has played a pivotal role in advancing the arts and arts education in Dallas.  She conceived transformative programs to improve the quality and availability of arts education through cutting edge technology, free and open access and outstanding leadership to every major Dallas cultural institution including the AT & T Performing Arts Center, Big Thought, Booker T. Washington High School for the Performing and Visual Arts, the Dallas Museum of Art, The Dallas Opera, the Dallas Symphony Orchestra, the Meadows School of the Arts at Southern Methodist University, the Edith O’Donnell Institute of Art History and the School of Arts, Technology and Emerging Communication at The University of Texas at Dallas (UT Dallas) and the College of Fine Arts at UT Austin.

In 1987, Edith co-founded Young Audiences of Greater Dallas to return the arts to public schools in the greater Dallas area. Young Audiences grew into Big Thought, one of the largest and most effective arts education programs in the United States.  Big Thought works closely with the City of Dallas, Dallas ISD, the White House Americorps program, and over 330 other partners across the city and country to provide the highest-quality programming in neighborhoods with the greatest need.

Mrs. O’Donnell has received many prestigious awards including The University of Texas Distinguished Alumnus Award, the James K. Wilson Award, the Hockaday Medal, the Linz Award, the Doty Award from UT Austin’s College of Fine Arts, the Lifetime Achievement in Education Award from the College Board, the Mustang Award and an honorary doctorate in Humane Letters from SMU.  In 2009, she received the Texas Cultural Trust Medal of Arts Award. She served on the Texas Commission on the Arts, as a life trustee of The Hockaday School, the DMA, the Advisory Board of UT College of Fine Arts and on the boards of Hope Cottage, the Children’s Medical Center, and the Lamplighter School.

Peter O'Donnell, Jr. is the former President of the O’Donnell Foundation, a private foundation that develops and funds model programs designed to strengthen engineering and science education and research and the arts.  A Dallas native, Mr. O’Donnell received his BS in Mathematics from The University of the South and an MBA from the Wharton Graduate School at the University of Pennsylvania.  In 1952, he married Edith Jones O’Donnell.

When Mr. and Mrs. O’Donnell created the O’Donnell Foundation in 1957, they focused on four areas: science and engineering, medicine, the arts, and improving K-12 education by improving the teacher corps.

In higher education, the O’Donnell Foundation provided the challenge grant that led to the creation of 32 million-dollar science and engineering chairs at The University of Texas at Austin.  Mr. O’Donnell was instrumental in the creation of the Oden Institute for Computational Engineering and Science and the construction of the Peter O’Donnell, Jr. Building to foster interdisciplinary research at the graduate level.  In 1985, with Mr. O’Donnell’s support, UT Austin became the first university in Texas to have a supercomputer.  From 2012 – 2019, UT’s supercomputing program ranked Number One among U.S. universities.

Mr. O’Donnell devoted many years to helping build a great medical school at UT Southwestern Medical Center (UTSW).  He provided the challenge grant to establish the Endowed Scholars in Medical Research, a program designed to accelerate the most promising new assistant professors in their biomedical research careers and help develop future leaders for medical science.  Recent contributions include $36 million to establish the Peter O’Donnell, Jr. Brain Institute to promote advanced research into treatment and prevention of all brain diseases.

Mr. O’Donnell also had a vision for The University of Texas at Dallas to become the MIT of Texas.  He worked tirelessly, using his political muscle locally and in Austin, to make UT Dallas a four-year institution.

Mr. O’Donnell’s important contribution to public education was developing the Advanced Placement (AP) Incentive Program in the 1990’s.  The program awarded students and their teachers incentives based on their performance on the College Board’s national AP exams.  It dramatically increased the number of high school students, especially Hispanic and African-American students, who pass college-level exams in math, science and English.  Later, O’Donnell founded the non-profit National Math and Science Initiative (NMSI) to replicate the program nationally.

Previously, Mr. O’Donnell was a Fellow of the American Academy of Arts and Sciences, a member of the Presidents’ Circle of the National Academy of Sciences, a member of President Reagan’s Foreign Intelligence Advisory Board, a Commissioner of the Texas National Research Laboratory Commission, and was appointed to the Texas Select Committee on Higher Education.  He was also awarded the Santa Rita Award in 1986 and The Kay Bailey Hutchison Distinguished Service Award from the Texas Academy of Medicine, Engineering and Science (TAMEST) in 2014.

In April 2016, the O’Donnells resigned their leadership of the O’Donnell Foundation.  Over 59 years, together and through the Foundation, they invested $780 million in philanthropy.