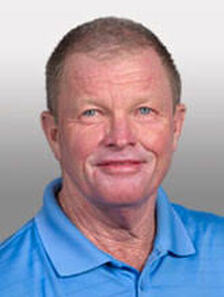 ​Tom Kite’s golf career could well be described as one of consistent excellence. A career highlighted by numerous wins, frequent high finishes and various prestigious awards and honors. Having grown up under the guidance of the Hall of Fame golf instructor, Harvey Penick, Kite had an impressive amateur career winning many junior and amateur tournaments including the Texas State High School Championships twice. At the University of Texas at Austin, Kite became the first freshman to compete on the varsity team and over the next four years he helped Texas win multiple tournaments, including three Southwest Conference Championships. He was voted captain of the golf team and led the team to two NCAA team championships and one individual co-medalist with Ben Crenshaw at the 1972 NCAA tournament. Kite represented the United States in the 1970 Eisenhower Cup Matches and the 1971 Walker Cup before turning professional in 1973.
His professional career includes winning 19 official PGA Tour tournaments and 10 team or overseas tournaments. The most memorable win for Kite was the 1992 US Open held at Pebble Beach Golf Links. For over 6 years, from 1989 to 1995, Kite held the title as the Career Leading Money winner on the PGA Tour He has been a member of 7 Ryder Cup teams and Captained the 1997 US Ryder Cup Team held in Spain. In 1979 the USGA bestowed their highest honor, the Bob Jones Award, to Kite for his sportsmanship. He won two Vardon Trophies for lowest scoring average in 1981 and 1982 and was named Player of the Year in both 1981 and 1989. After turning 50 years of age, Kite has focused on the Champions Tour winning an additional 10 events including one major championship, the Regions Tradition. In 2004 he was elected into the World Golf Hall of Fame, joining an elite list of greats who have played the game.
Tom’s ability to play the game at such a high level has led to the opportunity to design golf courses. Tom incorporates this vast knowledge in each design project with the goal of creating the highest level course. TomKiteDesign courses have hosted numerous PGA Tour tournaments.