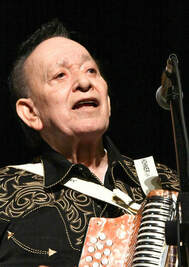 Leonardo “Flaco” Jimenéz has reached the heights of critical and popular acclaim during his six decade career as a conjunto and Tejano music artist.  Without compromising his musical vision, Jimenéz has introduced the traditional conjunto sound to mainstream pop and country listeners.  Flaco Jimenéz was born in San Antonio in 1939, and raised in a musical family. His grandfather Patricio Jimenéz was an accordion player who embraced the polkas and waltz tunes that are conjunto's stylistic precursors, and Flaco's father, Santiago Jimenéz, Sr., was a pioneering Tex-Mex musician who cut one of the first conjunto records, Dices Pescao in 1936. His brother, Santiago Jiménez, Jr., is also an accomplished accordionist and has recorded extensively.

Flaco Jiménez began performing with his father at the age of seven, and began recording at age fifteen as a member of Los Caminantes.  By the early 1960s, Jimenéz was already a Texas legend, playing clubs across the Lone Star State and regularly filling dance halls in San Antonio with music that fused the classic Tejano sound with elements of blues and country.  His recordings with Doug Sahm gave him his first serious recognition outside of the Tejano scene.  Jiménez then went on to New York City has worked with Dr. John, David Lindley, Peter Rowan, Ry Cooder, Carlos Santana, The Mavericks, Linda Ronstadt, Emmylou Harris,  Bob Dylan, and the Rolling Stones.

Jiménez won five Grammy awards during the 1990s. His received his first Grammy award in 1986 for Ay Te Dejo en San Antonio, one of his father's songs. He won a second Grammy award in 1990 as a member of the Tejano fusion group Texas Tornados.  Jiménez earned a Grammy on his own in 1996, and then again in 1999 for Best Tejano Performance for Said and Done, and then one for Best Mexican-American Performance as a part of the super group Los Super Seven.

In 2012, Jiménez received a National Heritage Fellowship awarded by the National Endowment of the Arts. In February 2015, Jiménez won a Grammy Lifetime Achievement Award. He also won a Best Video award at the Tejano Music Awards and earned a Lifetime Achievement Award from Billboard Latin Magazine for Streets of Bakersfield with Dwight Yoakam and Buck Owens. His music has been included on the soundtracks of many popular films and he has contributed on over 100 albums.  Flaco Jiménez continues to perform and record and is regarded by many as the “Father of Conjunto Music.”