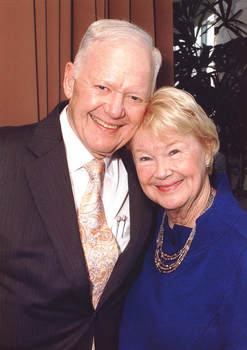 Nancy Ann Hunt received her BA in Elementary Education from Southern Methodist University and taught second and fourth grades. She coached six seasons of girls’ soccer and served as President of three different PTA’s in the Richardson Independent School District. She was awarded lifetime PTA membership both at the RISD and Texas State level. She was born in Kansas City, Missouri and is a seventh generation Missouri Native.

Nancy Ann taught Sunday School for 18 years and Confirmation for 12 years in service to her large Methodist church. She served on the Administrative Board and Staff-Parish Committee of her church for numerous terms, and led the long-range planning council for Children and Family Ministry.

She has actively served on the boards of College of the Ozarks, Southern Methodist University Alumni Association, The Winston School, Shelton School, and Parish Episcopal School. She currently serves a as Trustee of the SMU Simmons School of Education. She has also served as chair of the following organizations: Austin Street Center for the homeless, Genesis Women’s Shelter, Contact Crisis Line and New Friends New Life. Additionally, she was the Founding Vice Chair of the Conference on Crimes Against Women, serving over 2,000 law enforcement professionals across the USA. She was a Founding Trustee of the Presbyterian Hospital of Plano and served on the Board of Trustees of Children’s Medical Center Dallas and the Methodist Health System Foundation. She serves on the Advisory Boards of the Junior League of Dallas and the Crystal Charity Ball.

Nancy Ann has served the Circle Ten Council, Boy Scouts of America on both the Council Executive Board level and the Foundation. She currently serves on the Membership and Governance Committee. Nancy Ann was awarded the Silver Beaver Award for Service to Scouting by the Boys Scouts of America.

Ray L. Hunt is Executive Chairman of Hunt Consolidated, Inc.  His association with Hunt Oil Company began in 1958 when he joined as a summer employee in the oil fields. Hunt also currently serves on the boards of directors of Bessemer Securities Corporation and King Ranch, Inc.  Previous board memberships are several and include the Halliburton Company and PepsiCo, Inc.

From October 2001 to January 2009 Hunt was appointed by President George W. Bush to serve on the President’s Intelligence Advisory Board in Washington, D.C. In 1998 Hunt was appointed to the board of directors of the Federal Reserve Bank of Dallas.  He served as chairman of the board from 2002 to 2006. Additionally, Hunt is a member of the National Petroleum Council, an advisory organization to the Secretary of Energy in Washington, D.C.  Hunt served as its chairman from June 1991 to July 1994. Hunt is also a member of the Texas Business Hall of Fame.

Hunt also serves on the board of directors of the George W. Bush Foundation in Dallas, Texas.

Hunt has received many energy industry awards, including the American Petroleum Institute Gold Medal for Distinguished Achievement, the Distinguished Service and Leadership Award of the 25-Year Club of the Petroleum Industry, the Public Service Award of the Society of Petroleum Engineers, and the Distinguished Service Award for the Texas Oil and Gas Association.  Hunt has been elected an All-American Wildcatter and the Southwestern Legal Foundation gave him the John Rogers Award “for distinguished service to the petroleum industry and civic institutions.” Other awards Hunt has received include the Dallas Regional Chamber of Commerce’s J. Erik Jonsson Award, the Woodrow Wilson Center for International Studies Award for Corporate Citizenship, the Dallas Morning News’ Linz Award, and the SMU Maguire Center for Ethics & Public Responsibility’s J. Erik Jonsson Ethics Award.

Hunt graduated from Southern Methodist University in 1965, where he was designated a University Scholar, with a degree in economics.