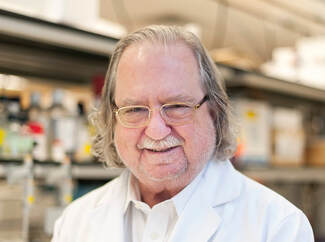 ​Jim Allison grew up in Alice, Texas, earned undergraduate and doctoral degrees from the University of Texas at Austin, and relentlessly pursued his curiosity about the immune system, inventing an entirely new way to treat cancer along the way.
Those efforts led the Nobel Assembly of Karolinska Institute in Sweden to recognize his work “stimulating the ability of our immune system to attack tumor cells” with the 2018 Nobel Prize in Physiology or Medicine.
His numerous discoveries about the function of T cells – white blood cells that serve as the targeted warriors of our adaptive immune system – led Allison to propose that blocking a brake on T cells would unleash them to attack cancer.
After demonstrating this approach in mice, Allison worked with pharmaceutical companies to develop the first such drug for people, essentially treating the immune system rather than the tumor directly.  That drug, called Yervoy, became the first to ever extend the lives of people with late-stage melanoma, and marked the beginning of immune checkpoint blockade as cancer treatment. Subsequent discoveries have extended immune checkpoint blockade to more than a dozen types of cancer.
Allison is professor and chair of the Department of Immunology at The University of Texas MD Anderson Cancer Center, where he also is executive director of the Immunotherapy Platform, director of the Parker Institute for Cancer Immunotherapy, deputy director of the David H Koch Center for Applied Research of Genitourinary Cancers and holds the Olga Keith Weiss Distinguished University Chair for Cancer Research.

He continues to conduct research to better understand the immune system and to extend cancer immunotherapy to more patients.
Allison is a member of the National Academy of Sciences and the National Academy of Medicine. He also plays the harmonica, co-leads two bands -- the Checkpoints and the Checkmates -- and has performed on stage with Willie Nelson on a number of occasions.