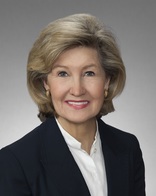 Senator Kay Bailey Hutchison
Kay Bailey Hutchison is a businesswoman and public servant. She serves as senior counsel at Bracewell, LLP and previously spent more than two decades in the public sphere, having stepped down in 2013 from her seat representing Texas in the United States Senate. The Senator is also an acclaimed author, and her most recent book, Unflinching Courage: Pioneering Women Who Shaped Texas, was released that same year. She has published two bestsellers – Leading Ladies: American Trailblazers (2007) and American Heroines: The Spirited Women Who Shaped Our Country (2004). In 2000, she and several colleagues coauthored Nine and Counting: The Women of the Senate. Hutchison was elected to the Senate leadership as Vice Chairman of the Republican Conference and later as Chairman of the Republican Policy Committee. Senator Hutchison served as the Ranking Member on the Committee on Commerce, Science, and Transportation. She also chaired the Military Construction Appropriations Subcommittee. She served two terms as Chair of the Board of Visitors at the U.S. Military Academy at West Point. Prior to her Senate service, Hutchison was elected Texas State Treasurer in 1990 and to the Texas House of Representatives in 1972. She was the first Republican woman elected to that body. She served in the Texas House until 1976, when she was appointed by President Gerald Ford to serve as Vice Chairman of the National Transportation Safety Board. Her business experience includes: Senior Vice President and General Counsel of Republic Bank Corporation, co-founder of Fidelity National Bank of Dallas, and owning a candy manufacturing company. She is involved with a variety of non-profit organizations. Notable awards bestowed on the Senator, among others, include the American Institute for Medical and Biological Engineering’s Congressional Science Champion Award (2014), the U.S. Hispanic Chamber of Commerce Lifetime Achievement Award (2012), Forbes Magazine's World's 100 Most Powerful Women (2005), the Women's Foreign Policy Group’s Inaugural Congressional Leadership Award (2004), the Woodrow Wilson Award for Public Service (2003), and Ladies' Home Journal’s 30 Most Powerful Women in America (2001). She was inducted into the Texas Women's Hall of Fame in 1997 and named an Outstanding Alumna by the University of Texas, where she earned her J.D. and B.A. Her alma mater also established the Kay Bailey Hutchison Center for Energy, Law, and Business. The Dallas Convention Center is named in her honor. Her great-great-grandfather, Charles S. Taylor, signed the Texas Declaration of Independence in 1836.